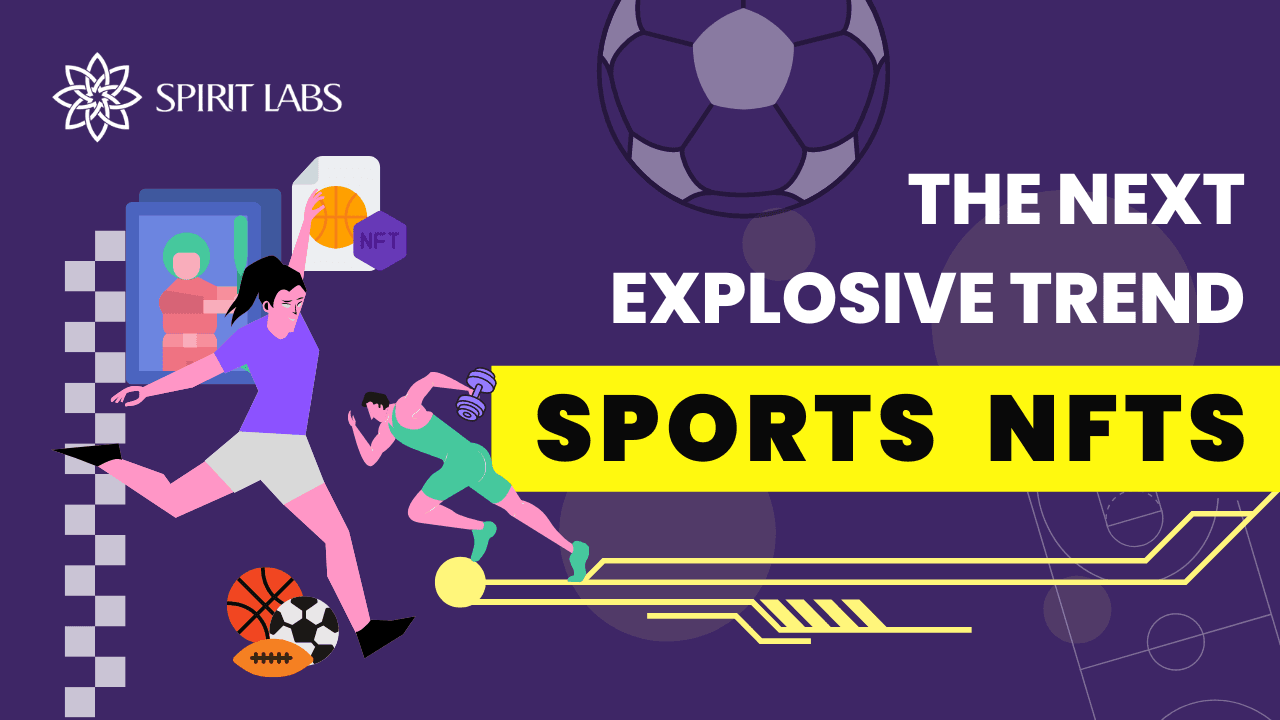 The Next Explosive Trend: Sport NFTs

Fan Tokens are rising these days as a new way for fans to archive and trade their favorite goods. Sports NFTs are one of them and quickly becoming popular collectables in blockchain technology. It could take many forms, such as photos, collectables, clips, and so on to record moments of sports history, so let's figure out how it could be the next explosive trend in the future with Spirit Labs!

What are Sports NFTs?

Sports NFTs are non-fungible tokens in the sports industry that are collected for sport fans. Sports NFTs are distinct and non-interchangeable secured on a digital ledger and can be connected with different files such as photos, recordings, clips and audios. It is one of the most growing NFTs in Fan Tokens which promise a changing future in the game of collectability for clubs and their millions of fans.

How are NFTs Related to Sports?

This is a great opportunity to take advantage of NFTs to engage with sports fans and create virtual transactions to make money for sports leagues or athletes by items of historical moments. Sports lovers like owning collectables of their idols, now NFTs are the new way of ownership by offering digitized items. That being said, the virtual expansion of NFTs holds many innovative opportunities that were previously bound in the physical world. Fans can now collect highlights from match moments, digital signatures, limited event tickets and many other new technologies that are available to access and purchase through crypto wallets.

Football clubs have the opportunity to get into a completely new revenue stream that does not compete with other offerings. It is a new and effective way to engage with fans and encourage them to buy, sell and trade goods related to football.

NFTs can be considered as well-known trading cards. The exciting thing is which category each card belongs to when the fan buys a pack and gets their favorite players. The concept of trading cards, which comes in different levels of rarity, can be implemented quite easily with NFTs on the blockchain technology.

Businesses can make use of the Fanzone App to provide access to the initial offer with user-friendly design. After successfully registering, fans are well-conditioned to receive the first free pack, which are available in higher editions but also have a small value. Then, fans can join, swipe and spend money for their favorite football player. However, the probability of getting a rare or super rare card is much higher due to the amount of app users.

Sorare – The Combination of NFTs Trading Card and Fantasy Game

The first mover for digital football trading cards is Sorare, already offering trading cards of the respective players from over 150 clubs. Sorare has benefited in particular from the hype in the NFT market, which has driven the prices of various singles to astronomical heights. The concept is different from the original trading card idea and the surprise effect unfortunately does not come into play as the special feature of the Sorare trading cards is the possibility to put together a team of 5 players and compete against other teams in competitions. However, the whole system is very complicated and requires several hours of time per week, and an investment of several thousand euros is necessary to set up a reasonably competitive team.

Acceptance by Fans and Ticket Trading

Considering that Fanzone has only been active for a few months, a good number of fans have already been activated. At Sorare, half of NFTs owners are probably not football fans at all, but rather speculators and crypto investors who buy trading cards mainly with the intention of making a profit.

However, it is not about creating speculative objects so that speculators can make high profits. Moreover, if the euphoria cools down, the shot can also backfire. Very important factors for the future development of the value of trading cards are the blockchain and the transaction fees. The distribution of the blockchain is only important to a limited extent, as the fan buys the cards on the blockchain where his favorites are available.

Sports NFTs are Forecasted to Generate $2 Billion in 2022

In 2021, global NFT trade exceeded $40 billion, with sports NFTs gaining prominence in recent years. According to Adrian Baschuk - CCO and founding partner of Ethernity Chain, in the CBS report about the newest advancements on the sector, NFTs for sports media alone are estimated to produce over $2 billion in transactions in 2022. In addition, Deloitte has reported that roughly five million sports fans will buy or get an NFT, with limited edition video clips and player cards being the most popular and lucrative, doubling the value of NFT transactions.

In the future, according to a recent study note from investment bank Jefferies, the value of the relatively broad sports NFT market is likely to reach $75 billion by 2025, up from roughly $14 billion today, with the explosion in sports NFT goods driving much of the development. With the NBA platform “Top Shot”, reaching over $500,000,000 in sales, Fantasy league platform “Sorare” increasing their transaction volume to $1,180,000 and “Topps trading cards” soon becoming public thanks to NFTs, the answer is clear and the future is here.

In 2021, global NFT trade exceeded $40 billion, with sports NFTs gaining prominence in recent years. According to Adrian Baschuk - CCO and founding partner of Ethernity Chain, in the CBS report about the newest advancements on the sector, NFTs for sports media alone are estimated to produce over $2 billion in transactions in 2022. In addition, Deloitte has reported that roughly five million sports fans will buy or get an NFT, with limited edition video clips and player cards being the most popular and lucrative, doubling the value of NFT transactions.

This picture of LeBron James taken on February 1, 2020 by the photographer Kimani Okearah grants the owner exclusive, non-commercial rights to the one available copy of the picture and its raw file.

The photo card of Houston native and WBC world middleweight champion Jermall Charlo from his win over Dennis Hogan that unified the belt on December 7, 2019 is the only one that will ever be made.

The 8-bit artwork of Michael Jordan is the 1/1 creation. This is one of the most expensive NFTs on the market from the cryptopunk creator Larva Labs.

Football legend Diego Maradona's death in November 2020 made the value of his collectibles soaring. 100 blockchains were created for the digital trading card, which features a version of Maradona at his final coaching spot for the Argentinian club Gimnasia de la Plata.

This is the first customized digital shoe kick-bit created by digital artist Tayl0r.wtf. This artist also has a cryptopunk that's worth $9.2 million.

Alex Morgan is one of the most popular female athletes in the world. Moreover, she is also the only one who makes the cut for most expensive NFTs.

The Aaron Judge player token has witnessed its considerable value growth over the last three years. This gives us insight into why the price has skyrocketed like it has thanks to the success of Judge.

For just a shade over $2 million, you can have the rights to sports cards and sports memorabilia provider JacksonsOfAllTrades' logo for Action Jacksons' Sports Cards.

Dapper Labs is a consumer-focused flow blockchain product made for games and digital collectables. Dapper Labs has cooperated with the NBA players association to create one of the most strategic partnerships in VC history. An NFT marketplace named “NBA Top Shot” has been generated where you can buy, sell and trade licensed videos of various iconic moments in the game. For example, the moment of LeBron James dunking over Nemanja Bjelica has become a famous highlight in the whole internet. This photo was bought in February 2021 for $208,000.

2. Sorare - Changing the Rules of the Fantasy League Game.

Sorare is a fantasy football game, where users buy, sell, trade, and build a virtual team with digital player cards. The players are used in football matches and can be traded on a transfer market. You can use the digital trading cards in your deck to construct a five-player team and earn money based on how well the players perform in real life. In other words, the real-time stats of featured players in football games will be automatically reflected on the card and utilized to calculate how many points you win.

A Christiano Ronaldo NFT was recently sold on “Sorare” for $289,920, this purchase broke all-time sale records for the most expensive soccer player card ever sold both physically and digitally.

OpenSea is the largest peer-to-peer marketplace for crypto collectibles and non-fungible tokens with more than 700 projects executed. The diverse platform including trading cards, virtual worlds and digital sports shoes as collectables has branded itself as the leading platform to buy, sell and trade NFTs. They have also got Formula 1 NFTs from Animoca Brands and anticipated a surge of interest from global sports teams to tokenize and distribute their collectibles over the next few years.

4. Decentraland - A Combination of NFTs, Gaming and VR

The goal of Decentraland is to bring back the virtual experience being the first ever virtual world which is fully owned by its users. Users can create, explore, monetize their virtual assets and trade them in a peer-to-peer network. We can brainstorm many options for the future of VR and NFTs or other virtual experiences but only innovation will truly answer these exciting questions powered by the Ethereum blockchain.

Enjin is the largest social gaming website platform where true ownerships of digital items are placed on blockchain. It hopes to compete against Ethereum as the key platform for game-based tokens. One of its advantages is a more eco-friendly creative design, as Enjin has released a five-step plan to enable carbon-neutral NFTs by 2030 and offered a suite of integrated products that make NFTs easy for individuals, businesses, and developers.

SuperRare is an NFT art platform that has garnered tens of millions in new sales in recent weeks and raised millions from investors. The $9 million Series A round was led by Velvet Sea Ventures and 1confirmation. Other investors participating in the round include Collaborative Fund, Shrug Capital, Third Kind, SamsungNext, Ashton Kutcher and Guy Oseary’s Sound Ventures, Mark Cuban, Marc Benioff, Naval Ravikant and Chamath Palihapitiya, among others. To date, SuperRare closes $9 million Series A from top investors.

In the next few years, there is likely to be a rapid development in the use of NFTs in the football sector. It is the ideal vehicle for fan experience and a tool to bind the fan to the club. In addition to NFTs for trading cards or match scene NFTs, numerous other applications in NFT-based games will develop into a very lucrative source of income for clubs. It is already foreseeable that the use of NFTs will become mainstream, de facto every fan who currently uses a social media portal would be definitely a potential customer.

Music NFTs - A Game Changer For the Music Industry