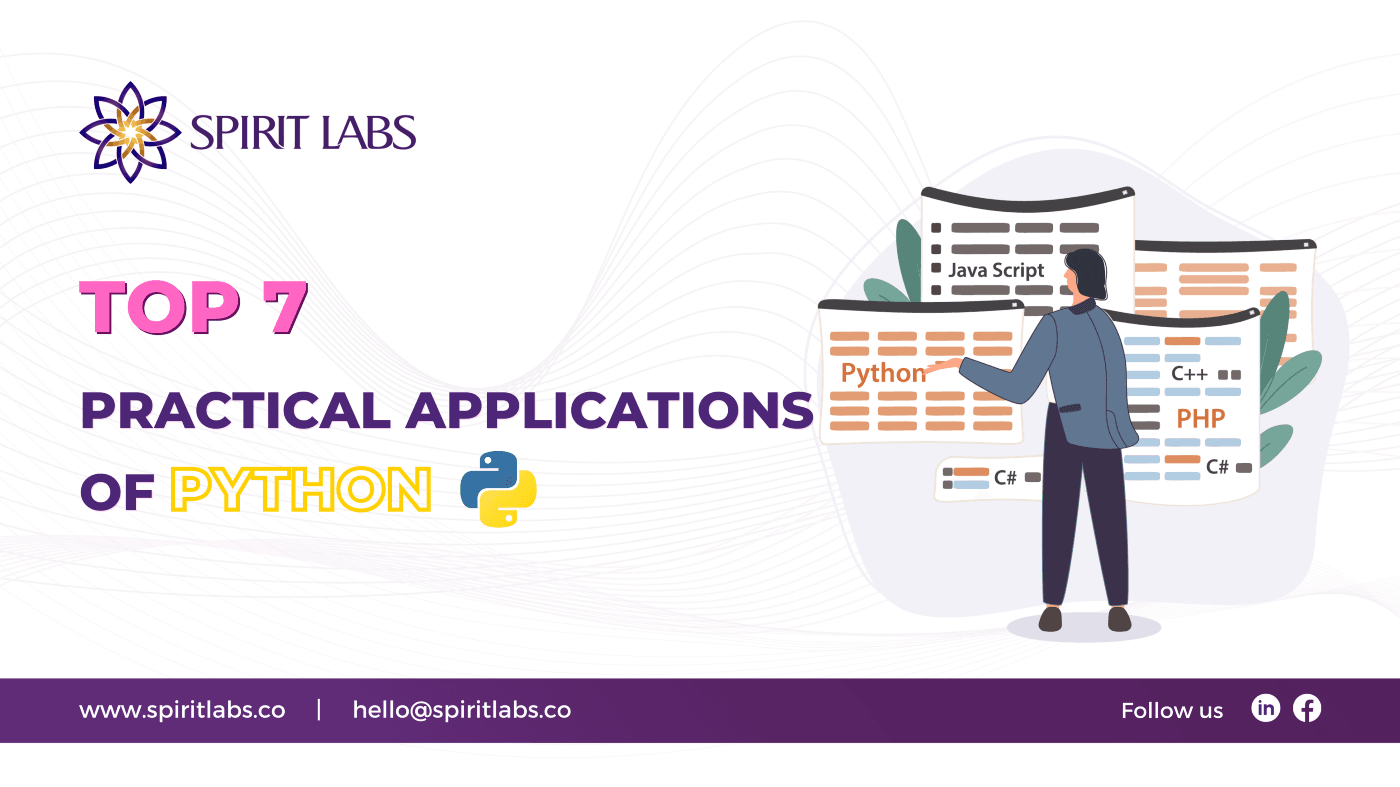 There are various programming languages in the world, professional and aspiring developers often find themselves in a fix when deciding which language to focus on to direct their careers.

Let’s find out what these amazing applications of Python are.

AI projects differ from traditional software projects. The differences lie in the technology stack, the skills required for an AI-based project, and the necessity of deep research. To implement your AI aspirations, you should use a programming language that is stable, flexible, and has tools available. Python offers all of this, which is why we see lots of Python AI projects today.

From development to deployment and maintenance, Python helps developers be productive and confident about the software they’re building. Benefits that make Python the best fit for machine learning and AI-based projects include simplicity and consistency, access to great libraries and frameworks for AI and machine learning (ML), flexibility, platform independence, and a wide community. These add to the overall popularity of the language.

Python development is a savior when it comes to pulling a large amount of data from websites which can then be helpful in various real-world processes such as price comparison, job listings, research and development and much more.

Famously known as the go-to programming language for web development, Python has an important role to play in it. Python has a large array of development tools and frameworks for every type of use. Famous full-stack web frameworks such as Django, TurboGears, and Web2Py include an HTTP application server, a database management system, a templating engine, and a request dispatcher for server-side development and an AJAX toolkit along with UI elements for client-side development.

Python isn’t only the most-popular language for introductory CS programs, it’s also the fastest-growing language for embedded computing. While C/C++ is slow to write, error prone, and frequently unreadable, Python is known for its writability, error reduction, and readability. The importance of readability can’t be overemphasized: when you’re working in a team, readability is paramount to maintaining the code. It has to be easily decipherable unless you’re willing to shell out more time and money on debugging and quality assurance. The design reuse of Python far outclasses C/C++, and in today’s Agile environments design reuse can be the difference between staying ahead or falling behind the competition.

Embedded algorithms are getting increasingly complex. Simple control loops are being replaced by neural networks and other heavily-involved processes that have helped Python gain its foothold. There are Python libraries like Theano that will optimize Python code for these processes. While Theano is mostly written in C/C++, Python is used to interface with high-performance libraries in a human-friendly way. Python libraries are thriving — PyPI, the Python package index, has over 80,000 modules, and these massive compendiums dramatically increase the productivity of programmers by giving them the option to skip a few steps and use already-established functions in their own code.

The robust standard library of Python makes it perfect for building entire operating systems. The object-oriented design of the language ensures large projects are easily managed. Python is compatible with most operating systems and can be easily used to build native applications for Windows and Mac computers.

Python is a powerful programming language and so is C. When these two are combined together, many operating systems are developed. The use of Python in creating operating systems came to life with Ubuntu’s Ubiquity, and Red Hat’s Anaconda and Fedora. OSes made with Python are running billions of computers today.

Python is a savior when it comes to pulling a large amount of data from websites which can then be helpful in various real-world processes such as price comparison, job listings, research and development and much more.

The financial industry uses Python on almost every front. Along with FinTech companies, other enterprises also prefer Python. You can design business apps that integrate with existing systems like databases and other websites or non-web apps.

Business Applications are different from our normal applications covering domains such as e-commerce, ERP and many more. They require applications which are scalable, extensible and easily readable and Python provides us with all these features. Platforms such as Tryton are available to develop such business applications.